The all-new NX opens a new chapter for Lexus, heralding new directions in design, new powertrains, including the brand’s first plug-in electric model, and dynamic improvements that deliver and more rewarding and connected driving experience. Next generation multimedia and connectivity and the application of advanced technologies for higher levels of safety, comfort and convenience further confirm the pivotal status of the new mid-size luxury SUV.

The full new NX press kit along with high resolution images are now available to view and download on the Lexus UK media website here.

It replaces a model that has been very successful for Lexus, with more than 170,000 European sales since its introduction in 2014. In the UK, it has been Lexus’s best-selling model for the past six years, amassing more than 27,000 cumulative sales. Most sales have been to customers new to Lexus, making it a key contributor to the brand’s growth in Europe.

To build on this achievement and deliver a compelling new product to customers who today expect much more from their vehicle, Lexus has carried out a total reinvention of the NX.

Its ambition and commitment are demonstrated by the major advances in performance, handling and efficiency and in no less than 95 per cent of the vehicle’s parts being new. All this has been achieved while maintaining Lexus’s essential human-centred approach to vehicle development.

Following its official reveal today (12 June), the new NX will be launched in the UK and European markets during the last quarter of 2021. Details of UK model range, specifications and prices and will be announced nearer the launch date.

The new NX marks a significant evolution of Lexus design, developing the avant garde appeal of the original model but expressing a more sophisticated, dynamic and mature appearance and more muscular character.

The aim was “functional beauty,” to meet increasingly diverse customer requirements and preferences. The new NX displays balanced, strong proportions with a road-gripping stance. Overall length has increased by 20mm, the wheelbase by 30mm, the width by 20mm and the height by 5mm – dimensions which ensure optimum packaging, notably with more space for rear seat passengers.

At the front, the Lexus spindle grille is set more upright and is more subtly framed, its shaped generating the overall form and volume of the body. Wider front and rear tracks contribute to the more agile and powerful look, with a long, sleek bonnet, short overhangs and wheel arches that can accommodate up to 20-inch wheels. At the rear the distinctive new features include Lexus blade lighting that spans the width of the tailgate and the first use of the “LEXUS” name in place of the “L” emblem, creating a more modern and simpler look.

The NX is the first model to feature Lexus’s Tazuna cockpit design. Taking its name from a Japanese word describing a rider’s use of the reins to control a horse, it is focused on giving the driver direct, intuitive vehicle control, following the principle of “hands on the wheel, eyes on the road.”

The cockpit space curves round from the driver’s door to the centre console, with information sources – multimedia screen, multi-information display, combimeter and (where specified) head-up display – grouped in a unified area so they can be read with minimal eye and head movement. Similarly controls such as the starter button, shift lever, air conditioning controls and drive mode selector are set on the same plane, so reach and operation are simple and intuitive.

The new NX is the first Lexus model to be fitted with the e-latch electronic door release system. This replaces the familiar internal door handle with a push-button switch next to the arm rest in the door panel, operated in a single, smooth movement. Safe Exist Assist links the e-latch to the UX’s Blind Spot Monitor, giving a warning if there is a risk of opening a door into the path of a vehicle or cyclist approaching from the rear and cancelling the action if necessary to avoid a collision. Lexus believes this can help prevent 95 per cent of the accidents caused by door opening.

Lexus has drawn on more than 15 years of hybrid electric technology expertise to produce its first plug-in hybrid electric vehicle (PHEV), the new NX 450h+. The halo model in the new NX range, it features a four-cylinder 2.5-litre hybrid engine and a rechargeable 18.1kWh lithium-ion battery – the highest capacity in its class. An additional rear electric motor enables all-wheel drive.

The plug-in system produces 302bhp and is expected to give 0-62mph acceleration in a little more than six seconds. Estimated CO2 emissions (WLTP combined cycle) of less than 40g/km and fuel economy better than 94mpg are set to be class-leading. The battery’s size and capacity and Lexus’s electrified efficiency know-how deliver a best-in-class EV range of 40* miles and enable all-electric, zero-emission driving at speeds up to 84mph.

Crucially, the system maintains high efficiency even when the battery is depleted. In many competitor models, operation defaults to an internal combustion engine, but in the NX 450h+ the switch is to an efficient self-charging hybrid system. In these circumstances, the NX’s efficiency is expected to be as much as 20 per cent greater than its rivals.

The new hybrid electric NX 350h uses fourth generation Lexus hybrid technology. Power is greater by 22 per cent compared to the current model, taking output to 239bhp and improving 0-62 acceleration by 15 per cent to 7.7 seconds. At the same time, CO2 emissions are expected to fall by around 10 per cent. The model will be available with front and all-wheel drive, both with a 1.5-tonne towing capacity.

Development of the new NX’s dynamic performance focused on delivering the Lexus Driving Signature – an ideal combination of ride comfort with steering, throttle and braking performance that is faithful to the driver’s intentions at every moment, generating confidence and a rewarding sense of connection with the car.

Central to achieving this is the use of Lexus’s Global Architecture K (GA-K) platform. This secures a lower centre of gravity (-20mm), an increase in the front and rear tracks and an improved front/rear weight balance, all of which benefit the car’s improved handling and the driving experience. The new suspension design features front MacPherson struts and rear double wishbones with trailing arms.

Beyond that, a much more rigid body has been designed using innovative lightweight materials to add strength and allow for the weight of extra bracing and reinforcements.

The new NX features a completely new Lexus multimedia platform that meets customer priorities for fast, intuitive on-board connectivity. It introduces smart services, including a cloud-based navigation system, via the car’s data connection module (DCM). This provides real-time journey information and traffic updates without using up the customer’s data plan. There is also anew “Hey Lexus” assistant, which responds to natural voice commands, as if you are conversing with the car.

The standard system Lexus Link Connect, uses a 9.8-inch display with an anti-glare touchscreen and additional buttons for intuitive access to the most frequently used functions. On high grade models, the Lexus Link Pro system features a 14-inch display – one of the largest in it class. The high-definition screen presents clear graphics in all lighting conditions, while the speed of CPU (central processing unit) is 3.6 times faster than the current system.

The new NX is Lexus’s first model to feature the third generation of Lexus Safety System+, equipping it as standard with a comprehensive package of active safety and driver assistance features and setting a new benchmark for accident risk detection and prevention measures.

The improvements introduced with the new NX include further expansion of the Pre-Collision System’s capabilities so that motorcycles and some solid objects in the car’s path, such as trees, walls and utility poles, can be detected. It also gains a new function that identifies collision risks with oncoming traffic or crossing pedestrians when making a turn at a junction. Its detection response is quicker and the ability to avoid an impact is increased with the addition of Emergency Steering Assist.

With these developments, the Pre-Collision System can recognise and help to avoid 36 per cent more accident scenarios than previously.

Changes have been made to the Adaptive Cruise Control so that it recognises traffic cutting in in front of the NX more quickly and, in conjunction with upgrades to the Lane Trace Assist, follows a more natural line through bends. The ACC’s co-operation with the Road Sign Assist has also been expanded to respond to more signs and commands, including warning signs and STOP signs. When speed limits are recognised, the system alerts the driver to adjust the cruising speed. 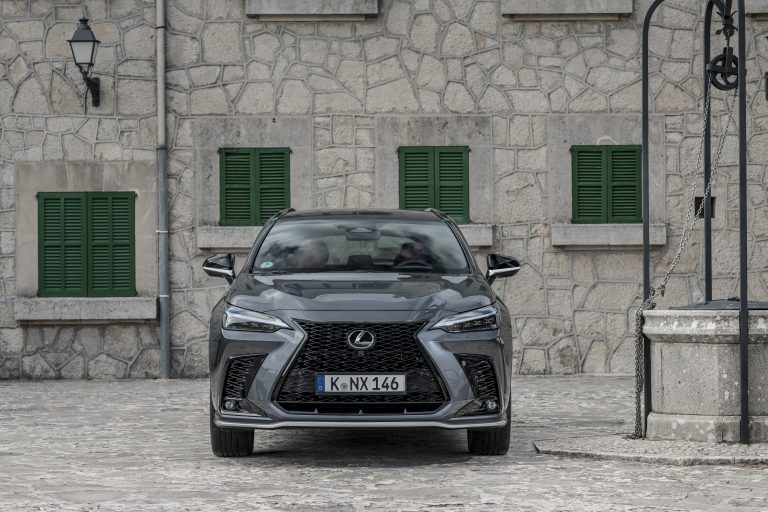 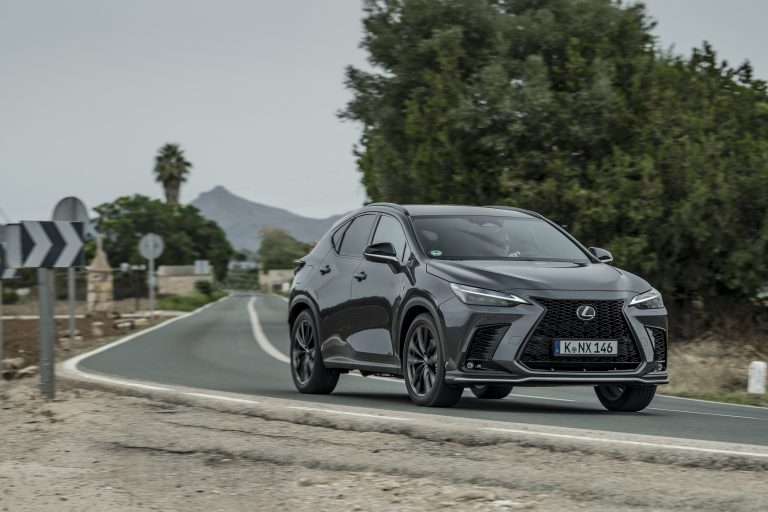 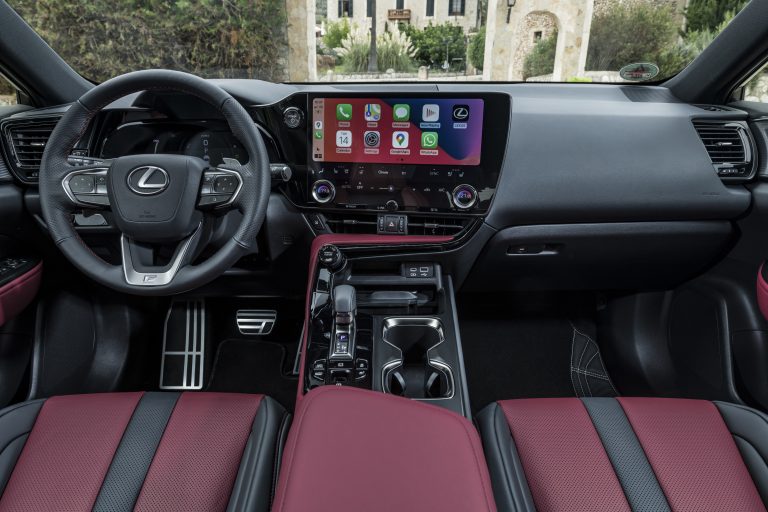 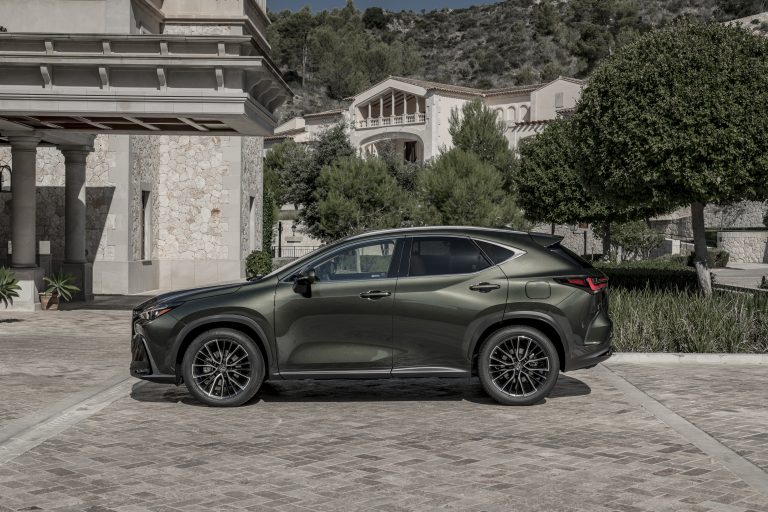